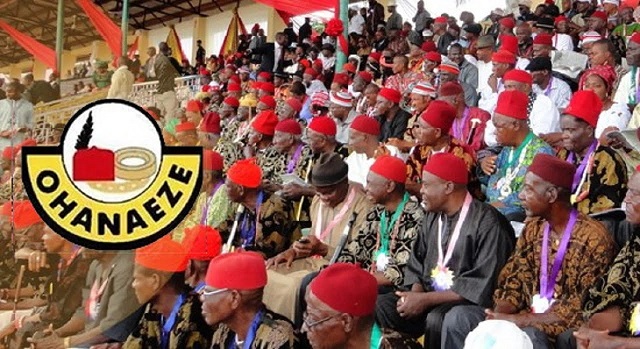 Ohanaeze Ndigbo Worldwide has described the turbaning of Minister of Transportation Rotimi Amaechi as Dan Amanar Daura as a big boost to the realisation of Igbo presidency in 2023.

In a statement in Kaduna on Sunday by its Secretary-General, Mazi Okechukwu Isiguzoro, Ohanaeze Ndigbo, which described the former Rivers Governor as as beloved son of Igbo Nation and the battle-axes of Ndigbo, said Amaechi an asset to Ndigbo for the 2023 project.

Ohanaeze said: “The new Dan Amanar Daura, Rt Hon Chibuike Amaechi is a beloved son of Igbo Nation and the battle-ax of Ndigbo,.

 “We accept the reality that the pan Nigerian postures of the honorable minister for transportation had strengthened the cordial relationship between the North and Eastern Nigeria.

“The Minister’s gesture has brightened up the opportunity for the emergence of a New Nigeria anchored on justice and equity, Amaechi’s title has opened a new link between the North and Eastern region, which will boost the chance of Igbo in 2023.

“2023 Igbo Presidency accommodates all prominent sons and daughters from all Igbo speaking areas including Delta and Rivers states. Rt hon Chibuike Amaechi is the only bridge linking South/ south, South-East and the North, he is more of an asset to Ndigbo, as all eyes of the Igbo is on 2023, everyone is important to the realization of 2023 Igbo Presidency, and there will be no segregation in the 2023 Igbo Project.

 “Ndigbo expects more efforts that will make southeastern Nigeria benefit from the dividends from the Federal Government projects under the Ministry of Transport, we have the assurances that Rt Hon Chibuike Amaechi will deliver all railway, deep-sea, and dry sea projects in the southeast and South-south before the end of the year, because Ndigbo is proud of his upright declaration of his Igboness, which is the personality traits for his accomplishments right from the beginning of his political trajectory and to his future aspirations.”