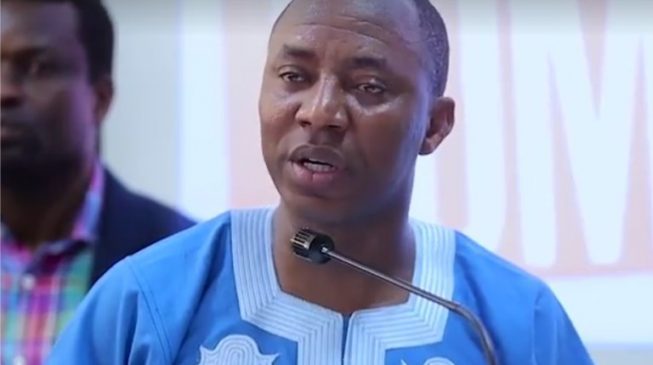 Human rights activist and publisher, Omoyele Sowore has carpeted the two major political parties in Nigeria, the All Progressive Congress (APC) and the Peoples Democratic Party (PDP) saying both of them are on the verge of collapse.

According to Sowore, the PDP thought it was invincible before the 2015 elections but was surprised when the APC pushed it off. He said just like PDP fell, APC is also set to fall.

Naija News reports Sowore made his mind known during an interview with Vanguard which was published on Wednesday.

He said: “I have seen and read, sometimes watched movies of oppressive systems when they are about to collapse. They look very strong, they act very strong, and they get very desperate. I think that’s what is happening to the two major political parties.

“You remember the Peoples Democratic Party, at the time it was about to collapse or lose its relevance, they claimed that they will rule for 60 years. That was around 2014, and a year later, they lost completely. The same thing is happening with the APC. I don’t even think APC will go that far because they’re collapsed already. The party is collapsing as we speak. It’s falling apart under the weight of its own external and internal contradictions.

“The external contradictions or processes are the total rejection of Nigeria populace of these political parties, because there is no difference between the two political parties. We can’t say enough of that. They are the same.”

Sowore lamented that Nigerian politicians and parties have no known ideologies and that is why it is easy for defections to take place.

He added that there is no difference between PDP and APC but Nigerians deserve better.

“Nigeria is the only country in the world that I know where you can go to bed as a member of APC and wake up the next morning as a PDP member. What is the difference? But, what you can see is that Nigerians are tired of this kind of government. What you see is desperation as a matter of fact, they are clogging to straws because they are drowning because this is their last breathe from both sides of the political sides, even though they are one and the same in terms of character, nature and behavior.” he said.