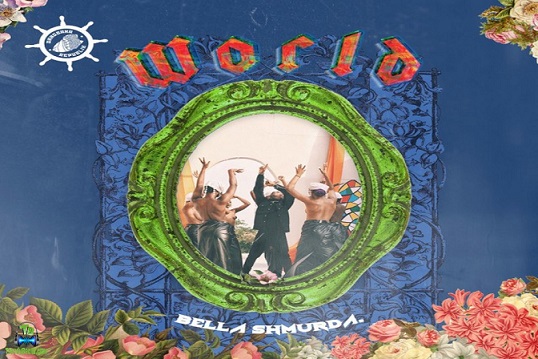 (Bella Shmurda – “World” Music Review) After revealing in his last song that there was a popular discussion among people that he’s someone who lives his life “in a Rush”, Bella Shmurda drops this new track to make it know that he will never Lose Himself to the World!!

Bella Shmurda who became a Nigerian music Sensation just after his Vision 2020 Song and then he went ahead to make the remix with Olamide Baddoo has come through to drop another Banging song which he titled “World” and in this song Bella Shmurda Took his time to mention the various ills of the present society – ranging from the rising Public practice of Gay Relationship and Marriage all over the world – An act of Men getting married to Fellow Men, And Women getting Married to Women as well – which is regarded as a Taboo in the Holy Bible; Bella Shmurda being a Christian made his view known regarding this Practice.

On Another Note, Fine Boy Bella didn’t fail to let it be known that all the unusual happenings are signs of the Biblical End-Time and revelation of the Second Coming of Jesus Christ – from time to time we do come across news of a Father getting in Bed with his Daughter, Pastors confessing to using fetish Powers to perform Miracles, Church of Satan growing in membership everyday and according to Bella Shmurda; Some Rich Men Worships Lucifer….

Checkout some Notable Lyrics of the Song Below:

Bella Shmurda, well known for trending song Snippets before the Release of the main song obviously to ascertain if his Fans can Vibe to the Song and how acceptable the song would be. Bella Shmurda has some Snippets of Unreleased Songs which are still trending even without dropping the Full Version, thereby keeping his Fans in Suspense (Some of his Fans were of the Opinion that He shouldn’t have released the full version of the “Rush Song” because it was no different from the Song’s Snippet… Please, don’t ask me where I got that Information From! Lol!!). With popular Hits Like “Fade by Davido ft Bella Shmurda”, “Olamide Triumphant ft Bella Shmurda”, “Bella Shmurda Rush (Moving Fast)” and there’s likely a forthcoming collaboration with our StarBoy Wizkid going by the Video they both posted on Instagram and Twitter a Few Weeks ago. Bella Shmurda, in our Humble Opinion; is the New Rave of the Moment in the Nigerian Music Industry.