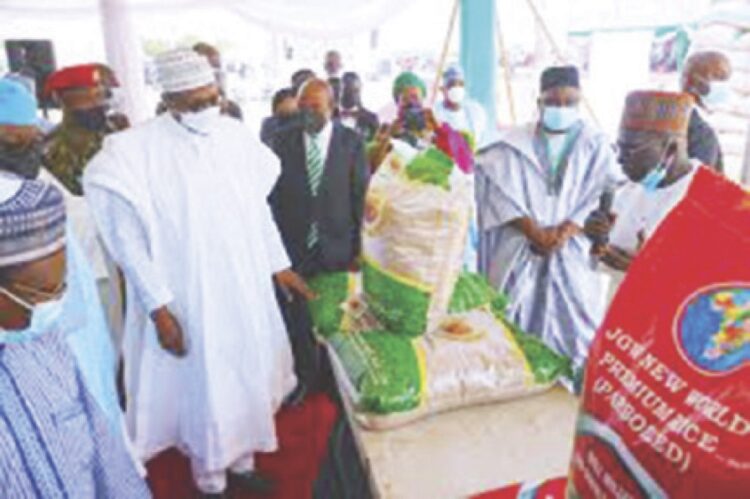 It was a moment of joy in the penultimate week as the Federal Government unveiled the Central Bank of Nigeria/RIFAN Paddy Pyramids in Abuja.

Nigerians who saw the heaps of rice were happy. Since then, many have started saying goodbye to hunger, which has become common in many households in the country. The new hope is that local rice will soon flood the Nigerian markets. But that may be a pipe dream as there are many who despite the cheers and new hope believe that the Abuja rice show was a scam.

Senator Hanga Rufai is one of the stakeholders in rice production in Kano State. Speaking with Sunday Sun in a telephone interview, he dismissed the unveiling of the rice pyramid in Abuja as a scam.

According to him, the bulk of the rice they showcased was imported from the neighbouring countries to augment the small quantity produced locally in Nigeria so that they could cover up the money they have stolen from the Anchor Borrower Programme.

He said: “It is a scam. In a situation where bandits did not allow people to go to the farms, how could they have produced such a huge quantity of rice they showcased? Even where the bandits allowed farmers to farm, they didn’t allow them to harvest. In some cases, they went and razed their farms with fire. Not up to 20 per cent of our land last year and the year before was cultivated because of this banditry that is all over the Northwest.

“It is a scam because the Anchor Borrowers coordinators were stealing the money. The arrangement is for the farmers to produce rice commensurate with the money given to them, but at the end of the farming season, the coordinators of the Anchor Borrowers programme were seen running helter-skelter looking for rice to buy both internally and from foreign countries so much that a bag of rice which was hitherto sold for N10,000 went up to about N17,000 in the market. So, the rice they showcased was not actually produced in Nigeria, the bulk of it was imported from neighbouring countries like Niger, Benin Republic, and Burkina Faso.

“Kano is one of the largest producers of rice in Nigeria, we know what happened. We were there physically when they were buying rice in the market. There was production of rice, but not to the volume they showcased. If they said they produced one million tons, I am sure they did not produce up to 1000 tons.

“I have a large farm but didn’t have enough money to produce. So, I saw the Anchor Borrowers programme as an opportunity and showed interest to borrow. They featured thousands of us, but eventually, they gave about 100 of us. Each person got one bag of manure, one sprayer, a container of chemical, which was largely water, and one bag of fertilizer. I saw it as a scam and returned the items.

“The input they provided for farmers was for subsistence farming and the money they released did not reach the farmers because the leaders of the Anchor Borrowers programme stole the money. Before the former Minister of Agriculture was fired, I went to him and advised him to report the matter to the CBN, but he refused. Eventually, the president sacked him.

“So, it’s a scam. And you know that our man (Mr President) takes anything they tell him. But Nigerians know that this is a scam. The very poor people of this country know that they didn’t produce this rice pyramid. If it was produced here in Nigeria, how did a bag of rice jump from N10,000 to N28,000 or N29,000 during Christmas? So, the ordinary people were competing with them (leaders of Anchor Borrowers Programme) to buy rice in the market.

“The programme should have been run by the Federal Ministry of Agriculture in collaboration with the states. That way, there would be competition among states. But at the end of it all, everything turned out to be a scam. It’s unfortunate.”

In the same vein, rice dealers in some parts of Lagos State have criticized the Federal Government over its claim of availability of locally grown rice in the country, describing the claim as false and misleading. Some of the traders who spoke to Sunday Sun said the pictures of rice pyramid which the government boasted so much about was not real.

When Sunday Sun correspondent visited some areas in the state, including Agege, Ipaja, Alagbado and Ogba, most dealers claimed that they did not have local rice in their stores while the few who had said they only have limited supplies and offered to sell it at marginally cheap price compared to foreign rice.

A dealer in Alagbado area of the state, Joel Oganiru, told Sunday Sun that a bag of locally grown rice costs 26,500 while the same quantity of foreign rice sold for between N27, 800 and N29, 000.

The dealer also confirmed that he had equally seen the purported rice pyramid on social media but said there was scarcity of the brand the last time he tried to replenish his stock. “May be they have not shipped it to Lagos,” he reasoned.

The story was not different at Agege and Ipaja-Ayobo area of the state where another rice dealer had to make three different calls to his fellow dealers before he was able to ascertain the availability of the local brand of the rice which he offered to sell at N26, 800 per bag and on the condition that the correspondent would have to wait for about 30 minutes before the product would be brought to his shop.

In Niger State, only 20 per cent of the N6.5 billion given out to farmers in Niger State under the Central Bank of Nigeria Anchor Borrowers loan being jointly supervised by the apex bank and Rice Farmers Association of Nigeria (RIFAN) have so far been recovered from rice farmers in the state.

Between 2017 and 2019, the CBN through RIFAN, Niger State chapter, approved and disbursed the said amount as loans to 32,500 rice farmers in the state.

This loan, according to the Chairman of RIFAN in the state, Mallam Idris Abini were given in form of farmer implements and equipment, ranging from water pumps and accessories, rice seeds, sprayers, fertilizers, pre-emergency herbicides and post-emergency herbicides.

He revealed that the 20 per cent loan recovered so far in the state was made possible by the new policy introduced by CBN to appoint an individual as coordinator between the RIFAN, CBN and the farmers, and all farm inputs and equipment would be channelled through the person.

He pointed out that all the 32,500 beneficiaries of the loan in the state were made to pay 20 per cent of items given to them as equity through the coordinator, who served as a guarantor, adding that the policy was introduced by the CBN in 2019 when the farmers refused to pay back their loan.

“All items were given to the coordinator, who served as guarantor between the farmers, CBN and RIFAN. That policy has kept the programme going since 2019 till date. The CBN in its wisdom decided not to shut the door on Niger State because of her potential in rice production so it introduced the policy, and an individual was appointed to be in-charge of special RIFAN projects.

Explaining implementation modality of the new policy, Abini said: “All the inputs will be given to the Coordinator based on the number of registered farmers under him and they pay 20 per cent of the value of the items given to them as equity.”

He added that since the policy was introduced in 2019, about N195 million had been recovered from about 9,500 farmers who have benefited from the loan.

However, due to the policy and commitment towards the loan repayment shown by the state RIFAN since 2019, as contained in it reports recently presented to the National Headquarters of RIFAN, the state is being considered for the dry season funding.

Abini said about 65,000 hectares of rice farms is being cultivated by farmers in the state every year, producing an estimated 260,000 metric tons of rice in the state.

He, therefore, attributed the current high cost of the commodity to hoarding by the middlemen who want to exploit Nigerians and paint the present administration in a bad light of not doing enough in the area of rice production, stressing that “it is purely act of sabotage by some few individuals.”