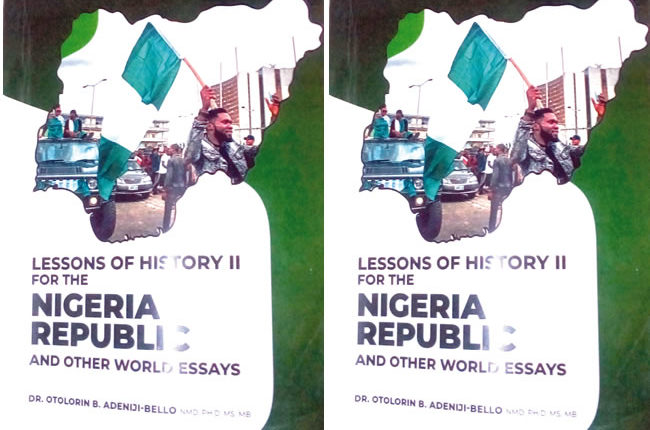 Dissecting The Nigerian Republic From Colonial Period Till Date

DR Otolorin Adeniji-Bello’s book, Lessons of History 11 for the Nigeria Republic And other world essays, simply takes the reader through the history of Nigeria and the challenges facing it.

The book catalogues the Nigerian republic before and after the amalgamation of 1914. The second chapter of the book particularly focuses on the present state of the country, with the rise of ethnicity. Dr Adeniji-Bello admits that each ethnic group now finds fault with every other one except its own, adding that this kind of behaviour breeds hegemonous ethnocentric nepotism.

The third chapter focuses on the northern and southern regions of the country. This section travels back in time to the colonial period when the British established an indirect rule in the northern region, and with this development, the culture of the northern caliphate was not tampered with. The author then believes this is the reason the average northerner feels a sense of superiority to his southern counterpart, that his culture was not tampered with by the colonial rulers through direct assault.

The author admits that “this behaviour is more or less carried forward in their relationship with the other ethnic entities today.”  The author also highlights the way of life of the Yoruba in this section.

Chapter four highlights how the people of the country are connected to one another, and this must have taken a lot of time and research on the part of the author, who lists the four brothers who came into what is now known as Nigeria via the Southern Egypt-Nubia (now Sudan) – Uthman Dan Fodio, Abdullahi Gogobir, Muhammadu Limroid (Lamurudu) and Abdullahi Mustafa Raji.

While Dan Fodio stayed in Sokoto, Gogobir moved to Borno and Limroid moved to the Yoruba setting, setting up shop in Ile-Ife. The author explains how Limroid finally becomes Lamurudu, and his son, Y’Adua (Odua or Oduduwa) became the progenitor of the Yoruba race.

He states that the Edo and Itsekiri later evolved from the Yoruba race, adding that the first Oba of Benin, Ewedemi, was one of the sons of Oduduwa. The case of the Ijebu in Yorubaland is another issue discussed in this chapter.
In subsequent chapters, the author looks at the present Nigerian outlook and the identity question. He agrees that there is still a lot more to be done if the country is to achieve its purpose of existence.
https://tribuneonlineng.com/dissecting-the-nigerian-republic-from-colonial-period-till-date/