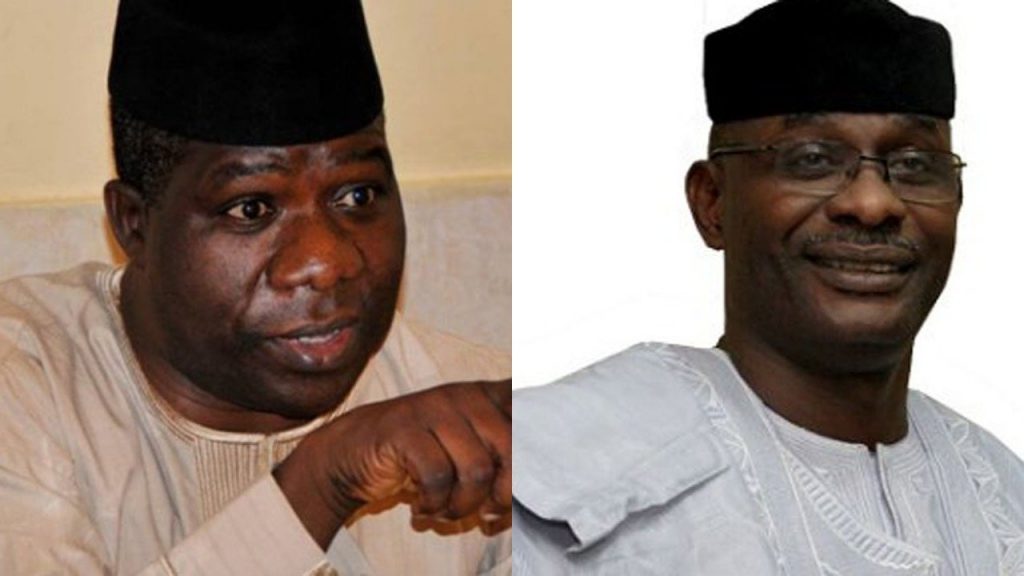 Ekiti: No Plans To Dump APC, We Will Teach Them Lessons – Bamidele, Bamisile

Some aggrieved All Progressives Congress governorship aspirants in Ekiti State, including the Senator representing Ekiti Centra, Opeyemi Bamidele and a House of Representatives member, Femi Bamisile have clarified that their grievances over the shadow poll will not make them defect from the ruling party.

The party men said as much as they do not intend to dump the APC, they will not hesitate to teach it a bitter lesson over the alleged electoral malfeasance perpetrated during the primary election using political and legal means.

Addressing his campaign team across the 16 local government areas, who converged in his office in Ado Ekiti yesterday, Opeyemi Bamidele and Femi Bamisile formally rejected the outcome of the APC primary election in Ekiti.

The election had produced Biodun Oyebanji as the flag bearer of the party.

The Senators said all the alleged shenanigans and breach of the party’s constitution perpetrated by Governor Abubakar Badaru-led primary election committee will be addressed politically and legally to teach APC a lesson it will never forget.

On whether the seven aggrieved aspirants that had constituted themselves into a political force with the acronym G7 would defect from the APC, Bamidele said: “None of us is contemplating defection from the APC, this is our party. We have contributed so much to it from the days of ”Alliance for Democracy.

“All we are asking for is justice. We are waiting for the national leadership to take the right step and this must start by them submitting a dummy name to INEC and using the two weeks window available as contained in the Electoral Act to do what is right in this matter. I can be quoted that the name that will be taken to INEC in Abuja will be a dummy name, so those celebrating should do that in moderation.

“If it is part of their calculation that we will leave the party for them, they are making a mistake. We are still waiting for the national leadership on our collective position. We have filed petitions and if they endorse that impunity they called primary, it will be clear that we have exhausted all the internal mechanisms for crisis resolution and we can then go to the court of law”.

Reeling out how the election was allegedly manipulated, Bamidele said the Badaru-led committee hijacked the process by distributing materials a day before the election, changed collation centres and arbitrarily appointed those that would do Oyebanji’s biddings to compromise the process and subvert the will of the people.

“The Ad hoc staff were to be adopted for the conduct of the poll because it was assumed that every member in Ekiti would have taken position. When you talk of ad hoc staff, it means those that would be brought from the national secretariat of the party or APC members from other states.

“The process was totally hijacked by the Badaru committee. What we saw were campaign managers, sponsors and promoters of Biodun Oyebanji being appointed and saddled with the responsibility of being Returning Officers in the 16 local governments.

“The election materials were to be distributed early on Thursday before the start of the primary and to be distributed in the presence of agents of aspirants, INEC, security chiefs and monitoring teams. But materials, both sensitive and nonsensitive, were distributed the previous night. We got calls that as of 11pm, Governor Badaru had handed over materials to Returning Officers from the 16 councils.

“Out of the 16 Returning Officers appointed, 11 of them were with Oyebanji when he collected his expression of interest form at the party Secretariat in Abuja.

“In several of our local governments, the venues of our collation centres were changed. At the appropriate time, we will give evidence that will put all of us in public court and that will be useful in the court of law. Available INEC report shows that there was no voting, no valid primary election in Ekiti.

“One thing I can assure you is that the last is yet to be heard about the Ekiti governorship primary. We will not stop at anything to seek justice. We should take every step that will challenge this political misbehaviour from repeating itself in future so that politicians can learn how to take caution and be civil.

“Majority of Ekiti people are seriously disappointed with the way the election went. I thought the election would be free and fair because I thought Dr. Kayode Fayemi won’t get involved in things that will deprive the party of a free and fair process and that he will provide a level playing ground. Only history will judge me whether I was right or not. I thought I knew him, but I didn’t know that I did t know him quite enough”.

In his submission, Bamisile warned the security agencies against threatening people with arrest over the APC governorship crisis, saying such will not work.

“This is our state, we are fighting for what we believe in, this is a democracy where everyone has the right to support whoever he likes. The police shouldn’t threaten us with arrest. Nobody can stop this, the only thing they can do to stop us is to allow justice in our party.

“Whatever votes they have allotted to us will reflect on the day of the election. We won’t leave this party, but not leaving does not mean that APC will not be taught a lesson. This is not a threat, but a prophecy that will come to pass. We are not going anywhere, but if the party doesn’t do it right, they will be taught a lesson they will never forget”.