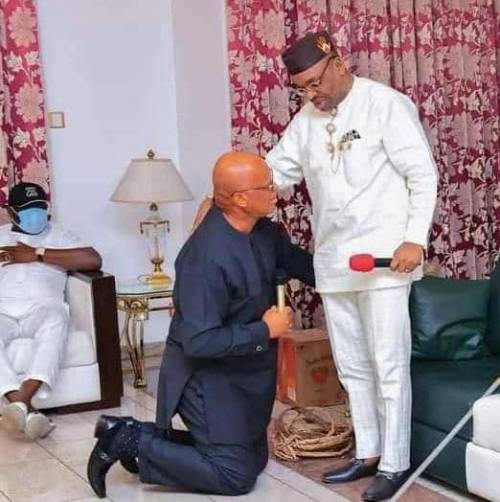 Apart from being anti-labour and anti-worker, Eno is used to arresting and detaining workers who protest against unfriendly labour policies in his companies.

They said they were arrested and detained on the orders of the commissioner for lands and water resources for joining NUPENG (Nigeria Union of Petroleum and Natural Gas) in 2007 and were only released by the Department of State Services (DSS) following the intervention of the Nigeria Labour Congress.

The workers’ claim was also confirmed in a letter dated April 3, 2007, and signed by I. O. Aberare, then NUPENG Deputy General Secretary, titled “Act of Provocation And Victimisation of Our Union Members”, and addressed to Umo Eno.

The letter read, “We have been informed of the various acts of intimidation and victimisation of the workers by your management because of their resolve to join the National Union of Petroleum and Natural Gas Workers (NUPENG), a registered Trade Union of their choice in the exercise of their fundamental human right.

“The most recent is the incident of 2nd April 2007, you invited seven (7) officials of the Royalty Hotel and Recreation Unit of the Union from various platforms and Mobil Guest House to coerce them to denounce the Union, upon their refusal, you attempted to detain them in the office and were only released at the intervention of the State Security Service officials.

“This morning, 3rd April 2007, they (seven of them) have been issued letters and placed on indefinite suspension. This act of victimisation for Trade Union activity, will not be acceptable to the Union. This act of hostility towards the Union and members will not engender industrial peace and harmony in the Mobil operation. You instituted a legal action against the union, rather than maintain the status quo, you have resorted to self-help. You cannot approbate and reprobate at the same time.

“In these circumstances, we hereby demand the immediate reinstatement of the seven officers and members of the union in the interest of industrial peace and harmony.”

Another letter seen by SaharaReporters and signed by Comrade Cyril Icho, then state secretary of NLC, which was dated April 16, 2009, and addressed to the commissioner also read, “The attention of the Nigeria Labour Congress (NLC), Akwa Ibom State Council has been drawn to cases of violations of workers’ rights by your company. Specifically, certain unfriendly policies which also contravene clear stipulations of the National Joint Industrial Council (NJIC) on terms and conditions of service for employees have been set aside. 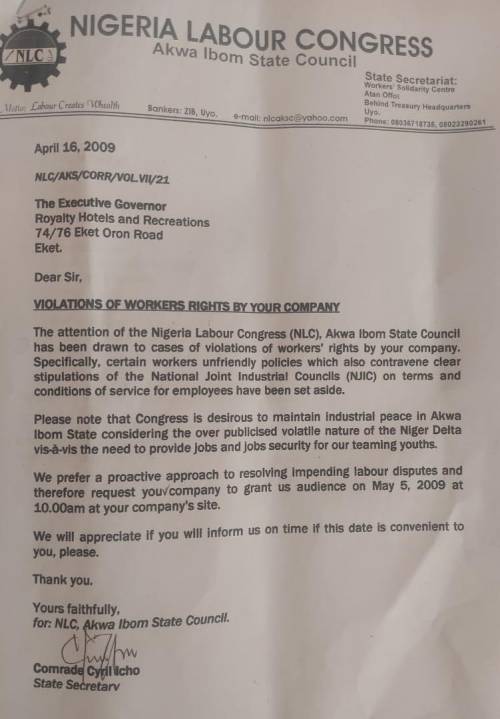 “Please note that Congress is desirous to maintain industrial peace in Akwa Ibom State considering the over publicized volatile nature of the Niger Delta vis-a-vis the need to provide jobs and security for our teeming youths.

“We prefer a proactive approach to resolve impending labour disputes and therefore request your company to grant us audience on May 5, 2009, at 10:00 am at your company’s site. We will appreciate it if you will inform us on time if this date is convenient for you, please.”

Speaking further, the workers accused Eno of lying on oath by tendering in court a fake affidavit claiming they denied being members of the union.

According to documents cited by SaharaReporters, in the case of suit Nos. HEK/23/07, HEK/MISC. 44/2007, in the High Court of Akwa Ibom State of Nigeria, In the Eket Judicial Division, Holden at Eket, between Royalty Hotels and Recreation Limited, Idiong Sunday Edem, Essien Bassey Akpan, Umoh Nkereuwem, Kingsley Imaikop Ekong, James Otu Mboho, Godwin Okon Inyang, 2nd and 7th Plaintiffs representing 154 Staff of 1st Plaintiffs working onshore on a fixed-term contract, and Natural Union of Petroleum and Natural Gas Workers (NUPENG)/National Union of Petroleum and Natural Gas Workers (NUPENG) Eket Branch, presided over by Hon Justice Ita G. Mbaba, Eno dragged NUPENG to court where he lost the case and also lost an appeal he filed at the Court of Appeal, Calabar in the case with Appeal No. CA/C/179/2008, Suit No. HEK/23/2007. 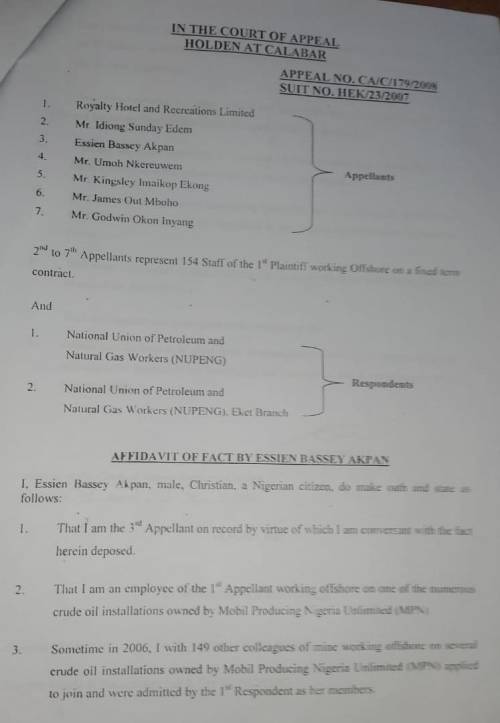 The workers whose names were included in the suit have filed a counter-affidavit at the Court of Appeal, that they never sought or obtained any consent to represent the employees of Royalty in suit No. HEK/23/2007 or the 1st appellant in his appeal.

They said there was no way they could have represented Royalty Hotel in a lawsuit against the respondent having applied to and joined the respondents being the trade union of their choice and that Eno’s document purporting to show that they are representing any party in Suit No HEK/23/2007 or in this present appeal is without their consent.

The Royalty workers further called on Akwa Ibom State NLC and workers not to endorse Eno for the 2023 governorship election because they will suffer if they make such a mistake.

The wife of a former employee of Royalty who was also sacked said the commissioner is not the best person for workers as his government will only increase the suffering of Akwa Ibom workers who are in pain due to non-payment of gratuity, pensions, promotion arrears and other entitlements.