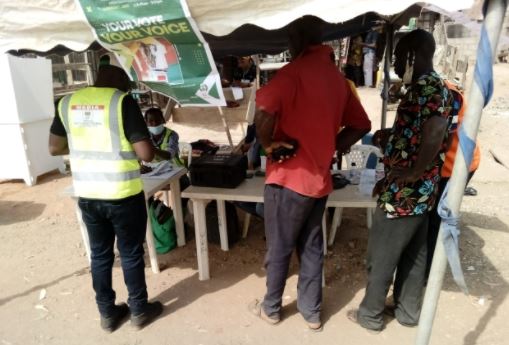 A legal practitioner, Abdulhameed Aliyu has hailed the Federal Capital Territory (FCT) Minister of State, Dr. Ramatu Tijjani Aliyu for giving a level playing ground for all political parties in the just-concluded Area Council Polls in the nation’s capital.

While adding that, this election is the fulcrum of true democratic principles and the practice of world-class standards.

He made this known in a statement he made available to newsmen in Abuja.

The statement reads: “Towards the build-up to the election date, the Honourable Minister of State of the FCT, Dr. Ramatu Tijjani-Aliyu defied all odds amidst very tight work schedule and toured all the six (6) Council Areas of the FCT in the grand style of campaign train made up of APC stalwarts in and around the FCT, in a bid to drum the best support for the party’s candidates across all the Area Councils.

“The turnout of supporters during each of these campaigns in the Area Councils were massive and resounding, couple with the positive political and humanitarian antecedents of Dr. Ramatu Tijjani-Aliyu, to the extent that no one will ordinarily want to place a bet that the ruling APC will not sweep and clinch the entire chairmanship seats of the six (6) Area Councils in Abuja.

“However, as of Monday, 14th February 2022, results of the Council polls were fully and officially announced by the Independent National Electoral Commission (INEC), which revealed a keenly contested poll, and the ruling APC and the main opposition PDP won three Council seats each.

It is worthy of note that in the recent political history of Council/Local Government elections in States across Nigeria, only Kaduna State recorded an opposition party emerging victorious and clinching to few seats against the interest of the ruling party, and now the FCT.

“This kind of level playing ground for all political parties in an election is the fulcrum of true democratic principles and practice of world-class standard.

“The votes of electorates in any poll can only be the expression of their voices, supporting or dissenting. It is for this singular reason that elections all over the world is preached to be free, fair, credible and transparent, so that at the end of the exercise, the voices of the masses, including that of the voiceless will be loudly and clearly heard, obeyed and respected”.

The statement continues; “This is because there is no democracy where political leaders at all or any level get threatened by the expression of electorates’ voices through their votes, and by extension, get jolted by political activities of opposition parties within the system.

“These feeble frights often becloud the minds of our political leaders in Nigeria, and they find themselves stifling and strangulating opposition parties within their domain, through the unlawful use of security personnel, thugs, undue influence, manipulation and intimidation of officials of State Independent Electoral Commissions, couple with engaging in grave electoral fraud and malpractices, with a mandate that only candidates of their own ruling party must sweep the floor and emerge victorious in Council/Local Government polls.

“Ideally, among the few advantages of having a government dominated by candidates and members of a particular political party is that there is less rancor within the system and there is a quick decision on governance, in achieving dividends of democracy for the masses.

“Ironically, the Nigerian system has proved otherwise, in the sense that political stooges and bootlickers are bred and smuggled into elected offices through electoral fraud and manipulations, to the point that underdevelopment, corruption, massive looting and indolence becomes the order of the day in a 21st-century society.

“Conversely, a typical Nigerian Governor will deploy all manner of political gimmicks, including engaging in thuggery and electoral manipulations and/or fraud to ensure that candidates of their political party sweep the floor and completely coast to victory”, the statement read.

Perhaps, our political gladiators should be reminded that sincerely delivering dividends of democracy to the masses is a sure bet of earning a return to elected offices in a free, fair, credible and transparent election, bearing in mind that victory in any poll is never a do or die affair.

The statement further reads: “Political analysts hold the view that such level playing ground for political parties and candidates in Council/Local Government polls cannot be afforded in States of the Federation, especially where State Independent Electoral Commissions have been reduced to puppets and are usually an integral part of States’ executive arm of government instead of been independent. Little wonder there are agitations from different quarters calling for the scrapping of State Independent Electoral Commissions, because the essence of their creation has long been defeated, which is subject to political debate.

“Certainly, for the generations to come, the 2022 FCT Area Council poll and its attendant outcome, couple with the leadership role of Dr. Ramatu Tijjani-Aliyu as the Minister of State of the FCT, will continue to be a great rallying point of reference for genuine political gladiators in Nigeria, in the discourse of true democratic principles and qualities, geared towards free, fair, credible and transparent elections, which all serving and future Governors in Nigeria must emulate”.

Prominent among the political parties that fielded candidates for the election are the usual ruling All Progressive Congress (APC), the main opposition People’s Democratic Party (PDP) amongst others.