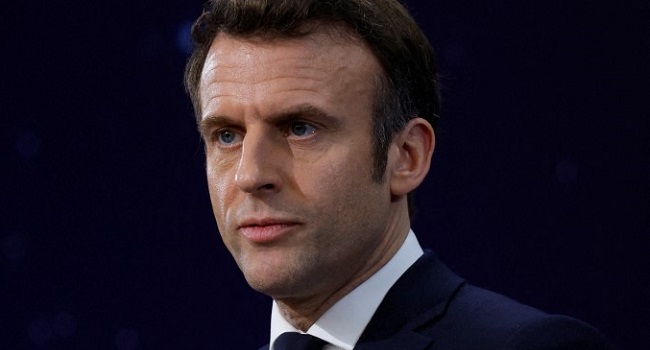 France, European Allies To Pull Out Of Mali After Decade

French President Emmanuel Macron gestures as he delivers a speech during an informal meeting of European space ministers, to mark the importance of the discussions on the European space strategy, in Toulouse, southern France, on February 16, 2022. (Photo by GONZALO FUENTES / POOL / AFP)

France and its allies in a European force announced Thursday they would begin withdrawing troops from Mali after nearly 10 years fighting a jihadist insurgency.

A statement signed by France and its African and European allies said that “multiple obstructions” by the ruling junta meant that the conditions were no longer in place to operate in Mali.

The decision applies to both France’s Barkhane force in the Sahel and the Takuba European force that Paris had been trying to forge along with its allies.

“The political, operational, and legal conditions are no longer met to effectively continue their current military engagement in the fight against terrorism in Mali,” the statement said.

The allies, therefore “decided to commence the coordinated withdrawal of their respective military resources dedicated to these operations from Malian territory.”

The announcement was made as President Emmanuel Macron is to travel to Brussels on Thursday for a two-day EU-Africa summit, following an 0800 GMT press conference at the Elysee on the “engagement of France in the Sahel”.

The Mali deployment has been fraught with problems for France. Of the 53 soldiers killed serving in its Barkhane mission in West Africa, 48 of them died in Mali.

France initially deployed troops against jihadists in Mali in 2013 but the insurgency was never fully quelled, and now new fears have emerged of a jihadist push to the Gulf of Guinea.

Even after the pull-out from Mali, however, the allies vowed to remain engaged in fighting terror in other countries including Niger.

“They agreed nonetheless to continue their joint action against terrorism in the Sahel region, including in Niger and in the Gulf of Guinea,” the statement said.

“They have begun political and military consultations with them with the aim to set out the terms for this shared action by June 2022.”

The announcement of the withdrawal came at a critical time for Macron, just days ahead of a long-awaited declaration from the president that he will stand for a new term in April elections.

It also coincided with Macron seeking to take a lead role in international diplomacy as he presses Russia to de-escalate in the standoff over Ukraine.

Especially with the French elections looming, Macron’s priority is to ensure that any withdrawal does not invite comparisons with the chaotic US departure from Afghanistan last year.

Macron on Wednesday prepared the ground for the announcement with a dinner bringing together the leaders of France’s key allies in the Sahel region — Chad, Mauritania and Niger.

Officials from Mali and Burkina Faso, which also recently experienced a coup, were not invited to the meeting.

There are a total of 25,000 foreign troops currently deployed in the Sahel region.

Other forces deployed in Mali are the UN peacekeeping mission MINUSMA established in 2013 and the EUTM Mali, an EU military training mission that aims to improve the Malian military’s capacity in fighting terrorists.

Some 2,400 French soldiers are deployed in Mali as part of the Barkhane operation as well as the EU Takuba force set up in 2020, which was intended to increase in numbers as French deployment was scaled back.

According to a French source, who asked not to be identified by name, even after the departure France will for a period provide MINUSMA and EUTM with air support and medical back-up.

But Paris’ withdrawal could set the stage for other European powers like Britain or Germany to abandon their roles in the multinational missions.

In the Sahel and Gulf of Guinea, “national armies will have to deal with problems on our national territories, and that’s our philosophy”, he told broadcasters RFI and France 24.

Relations between France and Mali have plunged to new lows after the junta led by strongman Assimi Goita refused to stick to a calendar to a return to civilian rule.

The West also accuses Mali of using the services of the hugely controversial Russian mercenary group Wagner to shore up its position, a move that gives Moscow a new foothold in the region.

“It is an inglorious end to an armed intervention that began in euphoria and which ends, nine years later, against a backdrop of crisis between Mali and France,” commented the Le Monde daily.