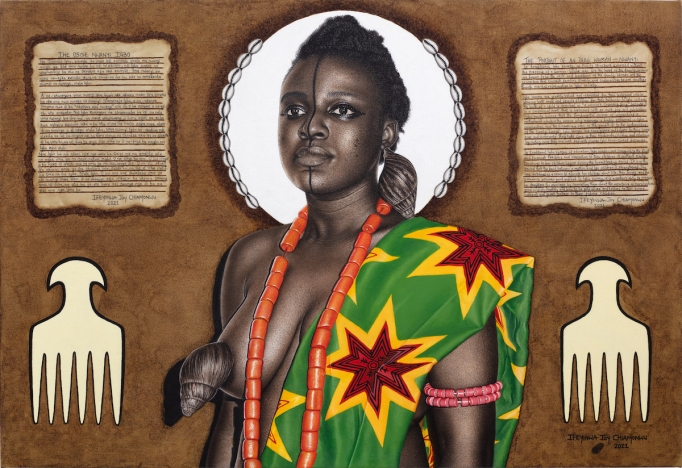 Ifeyinwa Joy Chiamonwu on Depicting Family and Friends in Detailed Portraits: ‘When You See Them on a Wall, You Actually See Me’

Ifeyinwa Joy Chiamonwu sees herself as “a vessel of her Igbo ancestors.” The Nigerian artist, who joined Jack Shaiman’s roster last year, set out to honor this sentiment with “Genesis,” her debut at the New York–based gallery. For the exhibition, Chiamonwu aims to elevate and preserve her Igbo community’s rich tribal customs and cultural practices by depicting those closest to her, reimagined as traditional Igbo characters and mythical deities.

In Nne Mmiri (Igbo Water Goddess), from 2021, one of the show’s most striking paintings, a naked Black female figure—modeled after the artist’s best friend—stands powerfully, turning her back to the viewer while holding two glasses filled with deep-blue ocean landscapes. The creases and pores on her back are so meticulously depicted, the image could be readily mistaken for a photograph. In the 2021 painting Umunne (Siblings), two of Chiamonwu’s younger siblings stand together with their flawlessly drawn eyes closed. Gorgeous snail shells, cowries, and beads adorn their bodies. In a recent interview, Chiamonwu said that she chose to depict the sitters’ eyes closed to “represent they are blinded by the love that they have for each other.”

The choice to portray friends and family members is deeply important to Chiamonwu, who passionately speaks about the meaning of this essential element of her work. “They are close to me—they are a part of me,” she said. “So when you see them on a wall, you actually see me. They understand the stories I want to speak about.”

Though she studied education at the Nnamdi Azikiwe University in Awka, Nigeria, Chiamonwu began drawing a few years back out of pure fascination with art. The young artist—she was born in 1995—has spent countless hours teaching herself how to create photorealistic art and perfecting her impressive technique. Though at first, she mostly worked with graphite and charcoal, like Onyinye 2 (2018) of a rock and a shell, Chiamonwu has gradually incorporated new mediums to her work, including sepia pigments, pastels, coffee stains, and acrylic paints. Still, the artist said she feels a special affinity with charcoal, which she still uses alongside her newly adopted mediums. “Charcoal is a medium that understands me,” she added.

No matter the medium, Chiamonwu portrays hairs, wrinkles, pores, and facial expressions are portrayed with exacting precision. “It’s hyperrealism,” she said. “I draw [these pieces] to look real. It takes a lot of time because you have to get the details, the pimples, the pores, the reflection, the skin —everything. You have to pay attention to detail, and [that] takes time.”

One of the pieces that took her the most time to complete is Lost Page (2018), which shows a woman, modeled after Chiamonwu’s mother, in the midst of laboriously weaving a large, highly detailed basket. The drawing took her about five weeks to complete, though she spent three weeks alone on carefully depicting the enormous basket, which is depicted on the cusp of completion.

Always present in Chiamonwu’s portraits are red beads, snail shells, and cowries which adorn her subject’s necks, wrists, earlobes, and heads. The artist adds these bodily decorations as a way to honor her Igbo heritage. “They show the identity of where I come from, the story that I want to speak about, and of the people [I’m drawing],” she said. “Beads and cowries are commonly used for beautification,” while snail shells are used for ritual and protection.

“Back in the day, in Africa, we practiced Juju, we practiced black magic,” she said. “If you felt that you weren’t safe, that you needed protection, success, a child, or just wanted to know spiritual things, you could go and meet a shaman who would bless the shells. So whenever you see the snail shell in my drawings, it’s an indication of tradition and rituals.”

Though Chiamonwu is no longer teaching in the classroom, she sees her drawings as a valuable opportunity to educate others about her Nigerian heritage. Reflecting on this sustained passion for education that she carries into her work, she said, “I want to educate others on themes of identity, cultural appreciation, love, acceptance, tradition, diversity in culture, Blackness, Black Africa—everything about Africa. These are the themes I’m here to explore, until forever, until I’m gone.”