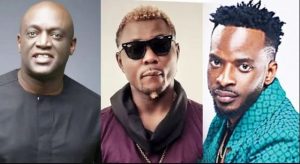 Infidelity: Sammie Okposo, 9ice, Other Celebrities Who Publicly Apologised To Their Spouses

In this piece, The PUNCH highlights five celebrities who had publicly apologized to their spouse following their wrongdoing.

“Several celebrities have faced issues in their marriage and while some had decided to solve theirs in private, some others may prefer a public apology to their better half.

In this piece, The PUNCH highlights five celebrities who had publicly apologised to their spouse following their wrongdoing.

Popular gospel artiste, Sammie Okposo, on Tuesday tendered a public apology to his wife, Ozioma, and his fans after he confessed to cheating on his wife.

The Wellu Wellu master, as he is fondly called, took to his Instagram account to reveal that when he travelled to the United States, he was involved in an intimate relationship with another woman.

This comes barely 24 hours after an American-based woman, identified as African Doll, accused the singer of impregnating her.

In November 2020, Nigerian singer, Alexandar Akande, popularly known as 9ice, became a topic of discussion on social media when a video of him fondling a lady that was not his wife surfaced online.

Another picture showing him naked also went viral. Reacting to the viral content, the singer, on November 21, implored fans to beg his wife for his ‘shameful’ act.

He uploaded a video of himself pleading with fans to beg his wife for forgiveness and added the caption, “Save a sinking vessel.”

Singer, Oritsefemi Majemite-Ekele, in October 2020, was accused of domestic violence against his wife, Nabila, by actress, Caroline Danjuma.

During that period, Oritsefemi had taken to his Instagram page to plead with his wife to come back home, even as he accused Caroline of being the ‘evil’ between him and his wife.

In response, Caroline hinted that there was domestic violence between the couple but the singer, however, denied being a wife beater.

Nigerian actor, Patrick Doyle, in 2019, had tendered an open apology and reconciliation to his wife, Iretiola Doyle, after admitting that he “screwed up.”

This came at a moment when divorce rumours trailed the marriage. It was buttressed by the fact that they have not been seen together in public for a long time, unlike what was obtained in the past when they attended all events as a couple.

However, in a Facebook post, the husband had admitted to wrongdoing and had promised to be a better husband to the actress.

In the foreign scene, American singer and songwriter, Justin Timberlake, had also made a public apology on Instagram to his wife and family.

This happened in December 2019 after photos emerged showing him holding hands with a female co-star at a bar in New Orleans.

Taking to his Instagram page, the singer cleared the air on the pictures and apologised to his wife, stating, “I drank way too much that night and I regret my behaviour. I should have known better.”