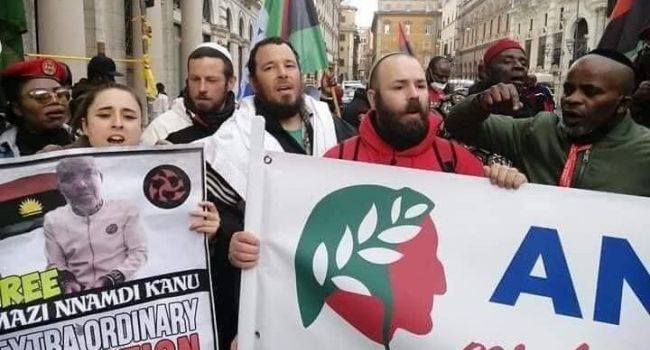 Ahead of the arraignment of the leader of the proscribed Indigenous People of Biafra (IPOB) Nnamdi Kanu, by the Nigerian government on Wednesday, his supporters in Italy have staged a rally in the ancient city of Rome.

According to IPOB’s Media and Publicity Secretary, Emma Powerful, in a statement made available to Ripples Nigeria on Wednesday, “Mazi Nnamdi Kanu’s supporters all over the world have been mobilising and staging protest rallies to press home the worldwide demand for his release.

“The protest in Italy which took place in the ancient and historical city of Rome on Tuesday, was led by white men who have been in support of our indefatigable leader and supreme commander, Mazi Nnamdi Kanu.”

He added that the protest rally had the demonstrators holding different placards, and “expressing solidarity with Kanu, while demanding for his immediate release from the custody of the Department of State Services (DSS).”

“What does this tell the Fulani Nigerian government about the innocence of a man they have been trying so hard to crucify? What crimes did Mazi Nnamdi Kanu commit apart from seeking self-determination for his marginalised people of Biafra?” Powerful asked.

Kanu is expected to appear before Justice Binta Nyako at the Federal High Court, Abuja, on Wednesday, in continuation of his trial for alleged treasonable felony.