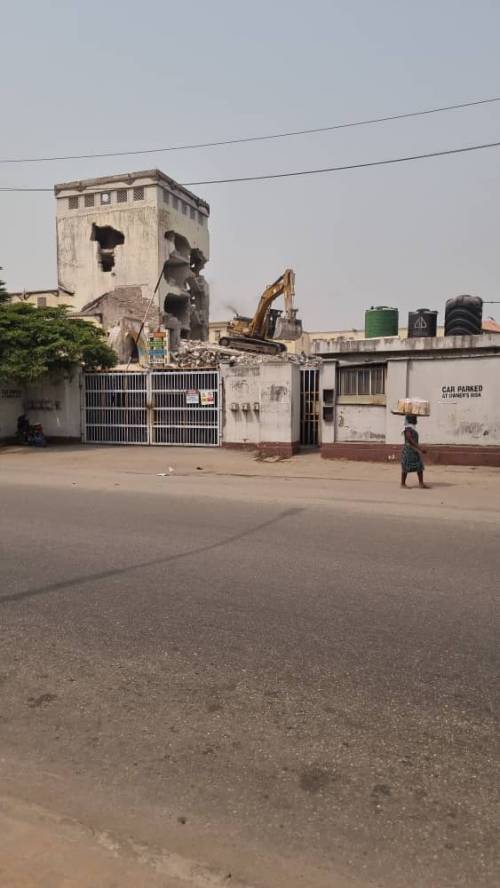 According to a report by SaharaReporters, the Lagos State Government on Wednesday began the demolition of Igbosere Court Complex on Lagos Island, which was razed and vandalised during the #EndSARS protest in October 2020.

SaharaReporters sighted a bulldozer demolishing the ancient court building as part of the process of rebuilding it.

Some miscreants had hijacked the protest in October 2020 and burnt the structure.

Nigerian youths had held protests, tagged #EndSARS in some states, including Lagos to call the disbandment of the Special Anti-Robbery Squad (SARS), a now-defunct police unit notorious for extrajudicial killings and human rights violations.

During the protest in Lagos, some youths were shot at Lekki Tollgate, the epicentre of the protests, by the Nigerian army and the police.

Governor Babajide Sanwo-Olu had promised to relocate the court after it was burnt.

According to the government, a property at Osborne Foreshore Estate, Ikoyi, Lagos, meant for the relocation of Igbosere High Court, would be ready by the end of May 2021.

The State Attorney-General and Commissioner for Justice, Mr Moyosore Onigbanjo, had also said the Igbosere court complex would soon be rebuilt.

“The temporary court complex consists of eight courtrooms with an equal number of judges’ chambers, secretary’s office, registrar’s office, general office for administrative staff, restrooms on each floor, canteen, litigants’ room, and an office for the Chief Judge.

“The new temporary court complex is equipped with the latest technology to enhance the digital recording of court proceedings,” he had said.