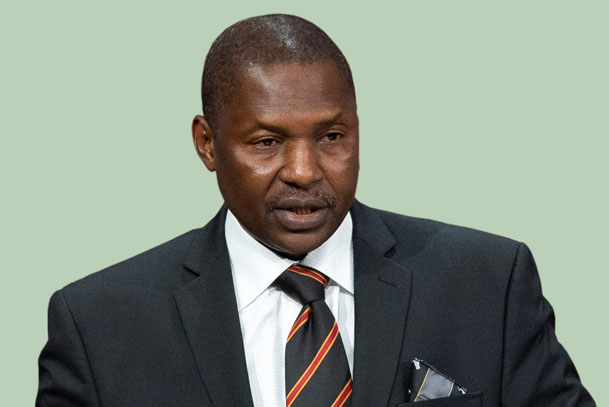 The Attorney General of the Federation (AGF) and Minister of Justice, Abubakar Malami (SAN), on Wednesday, said, he did not blame the judiciary for the delay in the dispensation of justice in the country.

He said, in a statement made available to newsmen in Abuja by his Media Aide, Dr Umar Gwandu, that the Federal Government accords respect to the democratic provisions of the doctrine of separation of powers among the Executive, Legislature and the Judiciary arms of government.

Malami’s reaction followed a statement by the Chief Justice of Nigeria (CJN), Justice Ibrahim Tanko Muhammad on Tuesday wherein, he held that the AGF’s position that the judiciary should be held responsible for delays in the trial and delivery of judgements on corruption cases involving politically exposed individuals.

The CJN said that the position of the Chief Law Officer of the country appears to be one-sided.
I Had Sex With Sofiat Before We Cut Off Her Head, Removed Flesh From Her Thigh For Money Ritual —Lover Boy
But Malami, through his Special Assistant on Media and Public Relations, Dr Umar Gwandu, said the Federal Government maintained the sanctity of the provisions of Sections 4, 5 and 6 of the 1999 Constitution of the Federal Republic of Nigeria that delineate the roles and responsibilities of the executives, legislature and judiciary.

He said it was on this note that the Federal Government supported the review of Section 121(3) of the Constitution to accommodate the provisions for financial autonomy of the state legislature and judiciary.

In addition to the Constitutional provisions, Malami explained that the Federal Government also came up with Executive Order 10 to enforce the provision of autonomy of State Legislature and Judiciary.

He said, “It is on the record that the Buhari-led Federal Government has a record of non-interference with or meddling into the affairs of the legislature and judiciary.

“It was within the context of this quality and feature of non-interference by the Buhari-led Federal government and for the avoidance of sub-judice that the Minister responded that high-profile cases were presented by the Federal Government for prosecution and the government came out with initiatives in its efforts to support speedy determination of justice”.

He noted with dismay the way his response to a question in a recent interview was construed to evoke unintended and non-existing inferences which some mischief makers projected him as blaming the judiciary.

“It was an innocent statement aimed at showing and re-enactment of tripartite division of powers and responsibilities among the Executive, Legislature and Judiciary,” he said.

Malami said this position was inconsistent with the decision of the Court of Appeal in Hon. Abdullahi Maccido Ahmad v. Sokoto State House of Assembly & Anor, (2002) 44 WRN 52 where the Court, Per Salami JCA held inter alia that, “The doctrine of separation of powers has three implications

The Minister said in view of the crucial role of the judiciary as an essential element of democratic system, the Federal Government gives attention to the budgetary provisions of the Judiciary in addition to welfare packages meant to enhance their operations.