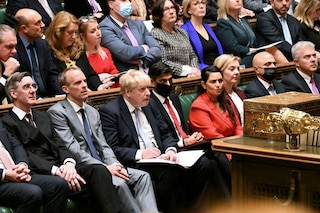 The public must be told if British Prime Minister Boris Johnson or his staff are fined for attending parties at Downing Street during coronavirus lockdowns, opponents said on Tuesday after police said they would not name anyone issued with a fine.

British police are investigating 12 possible COVID-19 rule-breaking gatherings, many held at Johnson’s office and residence, including some attended by the prime minister himself.

The inquiry, which is reviewing 500 pieces of evidence and more than 300 photographs, is expected to take weeks.

A limited report by senior civil servant Sue Gray on Monday found that alcohol-fuelled events had taken place at 10 Downing Street when rules banning all but limited social mixing were in force, and there had been “serious failures” of leadership. read more

However, Gray said she had been unable to provide a “meaningful report” because of the ongoing police investigation.

Johnson has come under pressure to confirm that Gray’s full findings will be made public when the police inquiry is complete, and to detail if detectives had issued fines to him or his staff.

Asked on Tuesday, Johnson’s spokesman said: “I’m not going to get into speculation, obviously it’s a matter for the police.”

However, London’s Metropolitan Police said they would not be naming anyone who received a fixed penalty notice fine (FPN), usually 100 pounds, in line with usual practice.

“Our approach during the pandemic has been to confirm the number of FPNs issued to people at particular events and to explain what those FPNs were issued for,” a police statement said.

Johnson’s opponents said there needed to be full disclosure.

“I can’t believe this needs saying. The public have a right to know if the prime minister is found to have committed an offence by the police,” Angela Rayner, deputy leader of the main opposition Labour Party, said on Twitter.

“Number 10 said they would publish the full report. They cannot be allowed to backtrack or hide the results of the police investigation.”

Liberal Democrat Leader Ed Davey said Johnson had to come clean and resign if he had broken the rules.

Johnson’s personal ratings and support for his Conservative Party have plummeted since revelations about parties emerged late last year, posing a serious threat to his premiership.

Opinion polls showed most British voters felt Johnson should resign: 69% in a Savanta ComRes poll and 63% in a YouGov survey.

Although there is rising dissent in his own party, in order to trigger a leadership challenge 54 of the 359 Conservative members of parliament must submit letters of no confidence and that figure has not been reached.

After initially saying that no rules were broken, Johnson has repeatedly declined to answer specifics about his attendance at some of the gatherings.

He later admitted being at one but said he thought it was a work event. On Monday, he repeatedly declined to say if he had been at a gathering at his own apartment above the 10 Downing Street office, citing the police investigation.