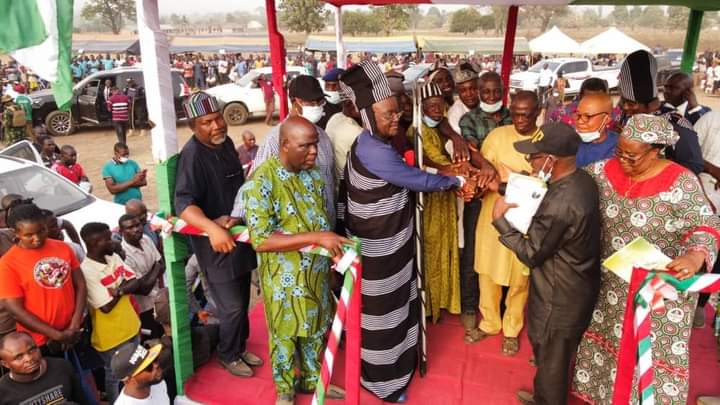 Benue State chapter of the Peoples Democratic Party, PDP has again received over a thousand defectors from the All Progressives Congress, APC.

Naija News understands that the new defectors were received into PDP on Monday by Governor Samuel Ortom alongside other top members of the party.

The decamping ceremony was held at Tse-Agberagba in the Konshisha Local Government Area of the state in the presence of loyal party members.

Some of the defectors, Naija News understands include top politicians and thousands of their supporters.

A two-term House of Assembly Member, Rt Hon Shimawua Azaigba and his followers were counted among the new defectors.

In his address, while receiving the new members, Governor Ortom expressed hope that the party would reclaim the leadership of Nigeria in the 2023 general elections.

According to the governor, the only solution to the current security and economic challenges in Nigeria is to vote back PDP into power come 2023.

He, however, charged members of the party to come together and rebuild irrespective of their individual differences.

Governor Ortom expressed optimism that the PDP will not only retain Benue in the 2023 general elections but also win the three senatorial seats, the 11 House of Representatives positions and all 32 seats for the Benue State House of Assembly.

The governor reiterated his commitment to protecting the interest of the Benue people as his core mandate, pointing out that he will continue to resist the invasion of the Benue land in whatever form.