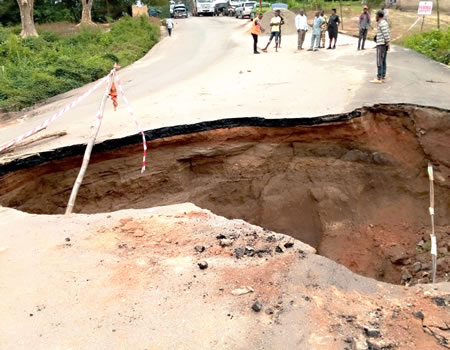 Worried by the collapsing roads network, which has brought socio-economic activities to a standstill, residents of Itu Mbonuso Clan in Ward 3, Ini Local Government Area of Akwa Ibom State, at the weekend, raised the alarm, accusing political leaders of marginalisation of the area in political offices and appointment.

They appealed to the National Chairman of the Peoples Democratic Party (PDP), Senator Iyorchia Ayu; Governor Udom Emmanuel, the PDP state’s chairman, Aniekan Akpan and the leadership of Maintain Peace Movement (MPM) in the state over what they described as political suppression and gross marginalisation of their people in the zoning of Ikono/Ini federal constituency seat between Ikono and Ini local government areas, while seeking micro zoning in 2023 to the area as it will be the turn of Ini people to produce the next federal lawmaker.

“Such act is undermining the principles of zoning of political offices in the area which has also contributed to the high level of underdevelopment in the clan without having any political officeholder from this place to hold accountable for the poverty situation of the place.”

Speaking to Nigerian Tribune, the Clan Head of Itu Mbonuso, Joshua Ise, lamented to that the MPM leadership, the widely endorsed and acceptable incoming successor of Governor Emmanuel, pastor Umoh Eno and other political stakeholders, recalled that despite their contributions to the development of Ikono/Ini federal constituency as the food basket of Akwa Ibom State they had suffered an age-long political neglect which, if not properly addressed may render the Maintain Peace Movement advocacy of Akwa Ibom State government as  an exercise in futility.

He said: “I call on Governor Udom Emmanuel, who is a product of zoning, equity and justice to look into our situation so that we can have a political officeholder in Itu Mbonuso clan that we can look-up to in regards to the abject poverty situation in my clan.

“My people are drinking water from a dirty pond. We do not have potable water in this clan and no power supply at all. There is an abject poverty level here in Itumbonuso. No good road network but in other places here in Ini Local Government Area, it is not the same. Neighbouring village here, Ikpe ward 2 is like London.”

Similarly, the village head of Nchana Ebua in Itumbonuso, Eteidung Jeremiah Akpan, lamented the poor situation of the area, adding that the poor access roads into the community had denied the local farmers access to major markets, a situation he said, had made farm produce to rot.
Akpan added that “the solution to the problem of the community is to have a son of the soil in government to represent Ikono/Ini federal constituency in order to bring development down to all nooks and crannies of Ikono/Ini.”

He pointed out that the likes of Ita Ukpabio, who is sympathetic to the plight of his community, as he often time uses his hard earned resources for the development of the area, will make a good political representative for the people if given a chance.

“I’m the village head of Nchana Ebua and the problem of Itumbonuso is that we don’t have people in government. Since the regime of Senator Godswill Akpabio, we have not had a representative and tha is why development does not come to us. Our few sons and daughters have done their best, like Ita Ukpabio,” he added.
https://tribuneonlineng.com/residents-allege-marginalisation-as-collapsing-roads-shut-out-aibom-communities/