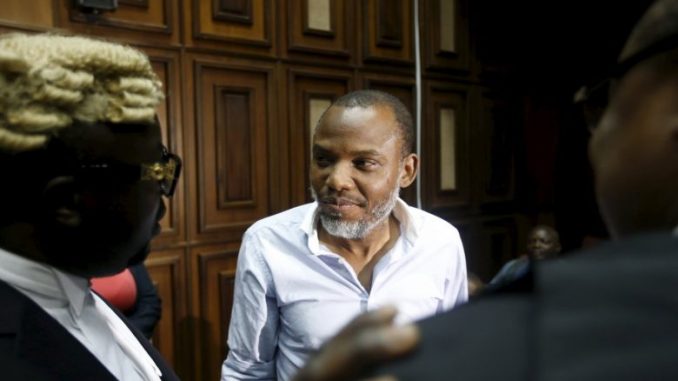 ‘Terrorism’: Nnamdi Kanu gets new date to appear in court

Justice Binta Nyako of the Federal High Court Abuja, has fixed April 8, for ruling on a preliminary objection filed by the detained leader of the Indigenous People of Biafra, IPOB, Mazi Nnamdi Kanu.

The leader of the now proscribed IPOB is challenging the validity of the 15-count amended charge preferred against him by the federal Gpgovernment.

The decision was taken after Justice Nyako fixed the date after Chief Mike Ozekhome SAN, counsel for Kanu and Shuaibu Labaran, the prosecution counsel, had adopted arguments for and against the Defendant’s preliminary objection.

Ozekhome thereafter pleaded with the court to acquit and dismiss all the charges filed against Kanu by the federal government.

Ozekhome argued that the 15-count amended charge was “defective and baseless”.

Specifically, Ozekhome informed the court that his application seeks the “quashing, striking out and dismissing of the 15-count amended charge” against Kanu for being “incompetent and denying the court of jurisdiction” to entertain charge.

The application, with 34 grounds, and supported by 36-paragraph affidavit, Ozekhome said, also seeks for an order acquitting and discharging Kanu for want of jurisdiction and defective, baseless and incompetent charges.

Ozekhome adopted his application and asked court to quash, strike out and dismiss the entire charges.

He asked the court to look at the entire grounds and affidavit, from paragraph 5 to 36, of notice of preliminary objection, etc.

“The defendant was unlawfully and renditionally brought to Nigeria against his will and in flagrant violation of international protocol on extradition,” he said.

Kanu had claimed that no prima facie has been made against him by the federal government throughout the proof of evidence in support of the charges.

However, the prosecution counsel, Shuaibu Labaran has asked the court to discountenance Kanu’s objection, and proceed to order him to enter defence.

Labaran, the prosecution counsel informed the court that the defence counsel had filed and served him with two applications, which he had responded accordingly.

Labaran informed the court that the first application is seeking an order quashing the 15-count amended charge levelled against Kanu and the other one seeking his bail, saying he was ready for business of the day.

Also at today’s trial, DSS bowed to court order, which ordered it to allow for free traffic flow at Federal High Court premises.

Unlike the previous practice, both private and commercial vehicles were permitted to move about unhindered on Wednesday as adjourning roads were opened for vehicular movement by security agencies and operatives.

ln the same vein, some cases slated for Wednesday were allowed to be heard by Judges in charge due to relaxation in the security arrangements.

As the proceeding was going on, issue bordering on Kanu spotting the same designer’s wear came up again.

However, Ozekhome complained bitterly that the DSS has vehemently refused to allow Kanu change clothes contrary to a definite order of the court that he must be allowed to change clothes.

Ozekhome said, for three times, Kanu’s younger brother has been refused access to DSS facility where Kanu is being kept.

More so, the lead counsel lamented that since Kanu was arrested and detained, his eye glass was seized by the DSS and has not been returned to him.

“My Lord, we demand that the reading glasses of the defendant be returned to him. We can’t afford to allow him go blind,” he said.

However, Justice Nyako said, the complaint has been noted and directed Ozekhome to proceed with business of the day.

Kanu appeared in the courtroom wearing the same Fendi designer cloth, weeks after the court had ordered the DSS to allow him change his dress pattern.

Meanwhile, the Director of Legal, DSS told the court that family members of Kanu brought a cloth with a lion’s heart, which “offends our standard operating procedures”.

The DSS was responding to the court’s question on why Kanu still wore his white Fendi designer cloth to cloth.

Ozekhome had complained that despite the court’s order, the DSS had refused Kanu to change cloths.

However, Justice Nyako asked the defendant; “Mr Kanu, what type of cloth do you want to wear?

“I want to wear the clothes of my people, “Isi Agu”, Kanu replied.

But responding swiftly on the issue of the cloth, the judge said, “that kind of cloth cannot be worn in my court.”

In addition, the court has asked the DSS to provide Kanu with his eyes glasses.

The defendant who spoke through his lead counsel, Chief Mike Ozekhome SAN, informed Justice Binta Nyako that his glasses brought to Kenya where he was arrested was damaged while being picked up.

He further claimed that the glasses he brought to Nigeria in 2015 when he was first arrested were seized by DSS andy have not been released to him.

“Till now, he does not have glasses to wear and his eye sight is deteriorating.

“My lord we do not want the Defendant to go blind, that is why we have decided to bring it to the attention of the court,” he said.

Meanwhile, after she had listened to Ozekhome, trial Justice Binta Nyako lookes into the matter and adjourned the trial to April 8, 2022 at 12 Noon.