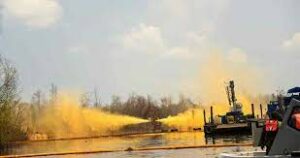 The untold story of the Aiteo Santa Barbara Oil Spill

The recent spill at Santa Barbara 1 well in Nembe, Bayelsa State, made the news so loud that it drowned some salient points and diverted attention from bigger stories elsewhere in the creeks.

Aiteo Eastern Exploration and Production Company, operators of the well, must have been under intense pressure going by the number of highly placed Bayelsa indigenes in the oil and gas industry.

They include the Minister of State for Petroleum Resources, Timipre Sylvia, who visited the site and said that President Buhari sent him; and Simbi Wabote, the Executive Secretary of the Nigerian Content Development and Monitoring Board.

A former Shell executive and highly respected monarch, Chief Edmund Daukoru is the Amanyenebo of Nembe. He obtained a Ph. D in Geology from Imperial College, London. He was employed by Shell International Petroleum Company from 1970, where he rose from Chief Geologist to General Manager of Exploration in Nigeria.

Although they were not reported to have said anything, the presence of such knowledgeable people cannot be ignored.

Also, by the nature of the well reservoir, which is said to be 80% gas and 20% oil, a fire outbreak during the spill would have been catastrophic.

But in a wide circumference of Santa Barbara, there were also issues crying louder for attention, just as there was the urge to dump established protocol for blame games.

There, some people claiming neglect, and ownership of the oil, steal it brazenly from the facilities of the oil companies, dissolve into the communities when there is trouble or even join protesters in pointing accusing fingers.

Recent reports confirm that Nigeria loses some 150,000 barrels of oil daily to illegal tapping of pipelines.  At that rate, the Nigerian Upstream Petroleum Regulatory Commission says the country loses about $4 billion every year or 10 per cent of its annual budget.

We may not like everything Rivers State Governor Nysom Wike says or the way he says it, but his war on illegal oil refineries in the state has been revealing.

In addition to the hundreds of illegal refineries that have been destroyed through the Wike initiative, the Navy has destroyed many of such refineries and arrested vessels.

The Eastern Naval Command of the Nigerian Navy disclosed recently that it had deactivated 175 illegal refineries while arresting 27 vessels under 11 months in its areas of operations.

The Command further revealed that 35,384,718 Metric tonnes of illegally refined AGO were evacuated.

Without such interventions, there is silence when vandalism favours the perpetrators through crude oil theft for sale or for refining into fuel.

In the criminal silence, the environment cries from degradation, but it is never heard until it impacts larger populations, like the soot in faraway Port Harcourt Wike is trying to stop from the source.

Oil facilities are also vandalized in anticipation of compensation. However, that is looking less lucrative now because of the protocols involved.

Although vandalism has become worrisome in the industry, other factors like operational errors and equipment failures contribute to oil spills.

A breakdown of the causes of the 846 oil spill incidents compiled by the National Oil Spill Detection and Response Agency, NOSDRA, between 2019 and May 2021 shows that more than 74 per cent (628 incidents) resulted from sabotage and theft. Equipment failure, which was alleged by the community in the Santa Barbara incident and corrosion accounted for 81 cases.

So what caused the Santa Barbara spill?

Usually, the established industry protocol is ignored in protests, driven by high sentiments, over such incidents.

The protocol for investigation is clear: Oil companies usually have technical teams that immediately deploy containment resources to limit the spill’s spread.

And if necessary, there is also  an international spill response team, involving experts from Houston (the “well killers”!) that can mobilise and be anywhere in the world within 72hrs (via membership of Oil Spill Response Limited, OSRL, a UK company, that globally coordinates urgent spill responses)

However, in some cases, these actions are delayed as tempers flare up in the affected community, resulting in attacks on company officials. Also, in anticipation of bigger compensation, some communities stop the companies from taking immediate action for greater environmental damage.

The next level of action is a Joint Investigation Visit (JIV) to ascertain the cause of the spill and the efficacy of planned mitigation action. The Joint Investigation Team comprises all stakeholders, including company officials, regulatory authorities, representatives of the affected community, experts and security officials.

The transparency of the exercise usually authenticates its conclusions. But in the case of sabotage, it is usually very clear from marks of saw blade; and the absence or evident removal of valve or other control instrument, as was alleged in Santa Barbara.

Also, pictures and videos that represent the summary of findings are taken for transparency.

But in many cases, the communities and state government officials reject the very obvious findings, as this will mean they get nothing, aside from the immediate relief aid provided to the impacted communities by the company.

There is also clear evidence when a spill is caused by equipment failure, as one can observe rusted sections or a failed piece of instrument.

The duration of the Santa Barbara spill, which was recorded on November 5, last year, may have contributed to the nationwide outrage it elicited. In an era of aggressive social media, the public was fed daily with images. In the eyes of the some people, Aiteo was too slow or uncaring.

The explanation of the company of its efforts to contain the spill, despite its challenging nature, fell on deaf ears as the community cried. Sources say the use of notable foreign well killers was hampered by the COVID-19 pandemic, which made difficult for the companies to mobilise quickly for a job in Nigeria.

For the company, which had bought the field from the Shell Petroleum Company of Nigeria (SPDC), it was an embarrassing moment that suggested it was uncaring.

Aiteo, which bought some of the assets offloaded by International Oil Companies (IOCs) who were partly driven out from onshore operations by vandalism, has handled many spills caused by sabotage without so much noise.

The vital 97-kilometre  Nembe Creek Trunk Line, which carries about 150,000 barrels of oil per day to the Bonny terminal for export, is owned by  Aiteo Eastern Exploration & Production Company, which bought it from Shell.  But the Nigerian ownership has not spared the trunk line from vandalism.

“At Santa Barbara, the impression that a Nigerian company was insensitive to Nigerians suffering from a spill was very unfortunate,” an official of the company said.

What the JIV found

Aiteo brought the spill under control on December 8 and the JIV took place on December 17. The large team comprised officials of NOSDRA, the Nigeria Upstream Petroleum Regulatory Commission (NUPRC), Aiteo and Bayelsa State and community representative, and security officials.

The JIV established that third party interference was responsible for the spill.

NOSDRA representative, Ismail Baba Ahmed, said the spill was caused by third-party interference. “There was no way the internal pressure from the well would have removed the valves. The most likely cause that could remove those valves were external human influence” he said.

“From the findings and information gathered by well control experts, it has been made succinctly clear that this well could not have been a blowout under whatever circumstances because of the way it was designed to be; unless there was third-party interference. The experts who killed the well have come forward to say the same thing. Others have buttressed the same position” he said.

But Biriyai Dambo, the Attorney-General and Commissioner for Justice in Bayelsa state, said the report did not align with the state government’s position.

In an interview with newsmen, Victor Ekpenyong, a member of the JIV, who is CEO of Kenyon International West Africa, the firm that eventually stopped the spill, said based on engineering analysis conducted during the assessment of the site, the investigation concluded that it was an act of sabotage.

He said the technical structure of the well was designed to last and Aiteo had been diligently conducting both first and second-line maintenance aimed at protecting the integrity of the well.

He said, “The investigation found that the spill would not have happened without external interference on the well. Before our team’s arrival at the site, we had to send some of our technicians to conduct a thorough inspection of the area to know what we were up against.

“They reported the blowout and its intensity. When we got there, the pressure that came from the reservoir was high, making it a lot harder to contain the spill.

“The way the oil was spilling was quite a challenge and some other factors such as the tidal circle, and the direction of flow among others were also challenging.”

On the reaction of the Bayelsa state government, he said “I was part of the team because our company killed the well. We presented our facts based on a well-thought-out engineering perspective and some other regulators also presented their own findings.

“Equally, the Bayelsa State government presented theirs. That’s all I can say. Technically speaking, we did not notice equipment failure. As it is, it is within the jurisdiction of the regulators to collate all findings and make an accurate judgment.”

NOSDRA has confirmed that the spill was caused by sabotage.

In industry practice, when sabotage is confirmed, the company does not provide any community compensation, although it supplies relief materials to alleviate the suffering of the affected community, which Aiteo did repeatedly, according to sources.

Also in the case of sabotage, the affected company does the clean-up, which the Federal Government is supposed to pay for. This is presented separately to the National Petroleum Investment Services (NAPIMS) at budget review sessions. But industry sources say it is usually difficult to get a refund.

Ekpenyong confirmed that Aiteo had a plan on the ground and when his team went to the site for the JIV, they discovered that all the areas where they had crude oil had been cleaned up.

Sadly, in many cases of sabotage, while the companies bear the socio-economic and environmental burden, the criminals walk the streets and travel the meandering creeks free men, looking for the next possible targets for vandalism.

They care little about the reasons IOCs are abandoning onshore fields, and have no sympathy for fellow Nigerians who dare to take over the challenges of producing “difficult fields.”